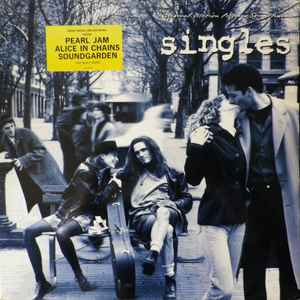 Why don’t I have many records from my grammar school era?  1) The rise of the compact disc (CD) nearly extinguished record pressings in the mid 90’s and 2) I DISLIKE grunge.  Nothing against the musicianship iself, but the “repugnant” genre has not aged well for me.  In 1992, I was in 7th grade, my last year of grammar school before heading off to high school.  It was an incredible time to be alive.  My dad had finally relented and let Uncle Mitchell and me get CD players. “The Lloyds” we called them because of their brand name.  He was convinced that the compact disc was a fad so bought us some players of inferior quality.  The first two CDs I bought were Soundgarden BadMotorFinger and Pearl Jam Ten.  Mitchell’s, I believe, were Alice in Chains - Dirt and Stone Temple Pilots - Core.  Grunge at its purest, the Seattle sound personified. These days, I can barely get through a song off any of those albums.  In a touch of irony, this morning I dropped you off at school and the radio played Pearl Jam “Alive” followed by Nirvana’s “Sappy.”  Woof.  Let’s get back to 1992…director Cameron Crowe released a wonderful film that incredibly captured 1990’s Generation X, Grunge, fashion, and young romance.  However, the Soundtrack manages to outkick the movie.  While I may not love grunge, this is a Best of the Best compilation from that famed epoch.  Stick with me on this one because I have an even bigger, ironic plot twist to reveal.

Singles.  A double entendre.  Was the movie made for the soundtrack or was the soundtrack made for the movie?  Chicken or egg.  Regardless, the album starts off with 3 tracks from Grunge’s heaviest hitters.  First up is my favorite Alice in Chains track, “Would'' followed by an unremarkable “Breath” from Pearl Jam then a beautiful, stripped down classic in “Seasons” from Soundgarden’s Chris Cornell.  I’ll never tire of the 2 playful tracks by The Replacements (one of my all time favs) genius wordsmith, Paul Westerberg.  But now the rubber meets the road.  “State of Love and Trust” was cut during the Ten sessions, specifically for the Singles soundtrack.  It is a masterful track and I think Pearl Jam’s best.  I remember being absolutely floored by it the first time I heard it, and it still pounds cathartic vibes in every subsequent listen.  How do you possibly improve an album after such a raw, emotional ballad?  Well, Cameron Crowe continues the energy with the best grunge/punk band that flew under the Sub Pop radar, Mudhoney.  Next Crowe adds my pick for the best track ever cut in the Grunge era: Screaming Trees’ “Nearly Lost You.”  This song is a masterpiece.  Barrett Martin’s (also in Mad Season) drums are incredibly underrated compared to the praise the guitars and Mark Lanegan's vocals justly receive.  Sadly, Lanegan recently passed and I highly recommend his solo album, Whiskey for the Holy Ghost.  The soundtrack ends perfectly with Smashing Pumpkins’ “Drown.”  The opening guitar riff is a beautiful lullaby.

So what about that plot twist you ask?  Your mother and I were married at the Windsor Court in New Orleans.  It just so happened to be a Jazz Fest weekend as well.  I woke up in our wedding suite alone, hungover and wondering “what the f*!% did I do?”  The omni bachelor was no longer single, and I was having a serious panic attack.  Your mom had to leave very early in the morning to get to a family event, so I packed up our stuff and headed home.  I stepped into the elevator.  It was just another slightly older, shorter man and me.  I imagine he saw a disheveled, terrified trainwreck.  He told me he was going for a swim and that I should consider the same.  Apparently, it’s his preferred choice to unwind and loosen up his body when he can’t surf.  He then showed me his waterproof earphones and relayed a calming surf story from Hawaii.  All of this happened in a span of two to three minutes.  The scruffy man got off the elevator before me for the pool, and I had this eerie sense that I knew the guy.  As I descended to the lobby, it hit me.  It was Eddie Vedder.   Pearl Jam was closing out Jazz Fest that day.  I’m forever indebted to him; he pacified a very nervous newlywed.  Inebriated State, but Love and Trust.  All my life, waiting on somebody…you would arrive very shortly after.

Favorite Tracks: “State of Love and Trust” “Nearly Lost You” “Dyslexic Heart” “Waiting for Somebody” “Would” “Drown”