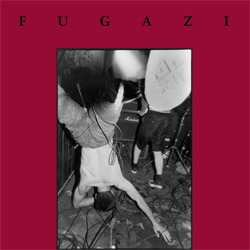 It sometimes comes as a shock to people to learn that my first love in music is punk.  I don’t outwardly fit the proverbial mold.  Growing up, my generation’s exposure to music was pretty much limited to the radio and whatever our parents owned in their collection.  However, adolescence allowed us to start formulating our own opinion musically and personally.  One of my best friends at Stuart Hall elementary, JM, was an incredibly gifted, artistic individual.  He was always ahead of us when it came to music.  I spent so many weekends sleeping over at his house watching movies (never watch Shakes The Clown) and listening to music.  Naturally, JM got into punk early and would always share these bands with me.  He was a big fan of Fugazi and Ian MacKaye’s other outfit, Minor Threat (as well as so many others in that DC era).  He dabbled in the Straight Edge philosophy (something I never attempted and obviously still don’t).  When we graduated Stuart Hall, we went to the same high school but went very separate directions.  He challenged the norm and our school’s restrictive nature and found a more artsy path, which is extremely difficult in a Catholic School; and I went the more traditional route as I was very concentrated in soccer.  However, we still remained friends, and he still shared his musical interests.  His car was also littered in band stickers, so you knew what he was into.  JM played in bands and excelled in the burgeoning field of graffiti art. This led him to Fordham University where he was able to fully blossom in an environment suited for him.  Christmas break before our Junior year of college, we met up for burgers at Camellia Grill to catch up.  It was a great time.  2 very different people who still held a core and honest interest in each other.  A few months later, JM was killed in a freak accident involving a shotgun at a friend’s house.  I can remember receiving that call in South Carolina as if it were yesterday.  It was devastating.  We lost so much in that accident. His funeral and interment were gut wrenching.  Any innocence I still possessed was shed that day.  His art still exists in certain areas and his memory lives in this music.  He was a great human and a great friend.  This band, this album, always makes me think of him.

Fugazi began when Ian MacKaye splintered from Minor Threat to form this new outfit with Guy Picciotto and drummer Brian Canty, formerly of Rites of Spring, and bassist Joe Lally.  The band had a precise focus on personal integrity.  They were pioneers of the DIY musical movement, staunch opponents of the corporate music machine and forcefully resisted exclusion.  The band toured relentlessly and insisted that no show ever cost more than $15, typically even $5.  Exclude no fan.  This effervescent 23 minute EP starts with arguably their most popular track, “Waiting Room.” An amazingly catchy song that opens with a fantastic bass line that sucks you in and pounds home the song’s message of fighting for who you want to be. “Give Me the Cure” is allegedly a song on HIV/AIDS, which I find relevant to our current Covid crisis, however, there is also some deeper interpretation on depression and human reliance on medication to make it through this short sojourn called life.  Something I am guilty of. Side B gives us “Suggestion,” such a ballsy song.  Fugazi is firing an anti rape/anti female sexual harassment song at their predominantly male corwd.  In my best Ina Garten voice, “how great is that?”   If I can say one negative thing about Fugazi and these Dischord/DC bands, they paved the way for….Grunge.  MEH!

Punk is not just speeding up music time.  It’s not always political.  It’s more a way of being.  It’s you looking at the world slightly different than perhaps the 3 people next you.  It’s formulating your own identity versus what is thrust upon you.  A true punk is naturally and openly just themself.  “Start being what you are.” - “Bad Mouth”

Life can be very difficult.  However, it can be a hell of a lot easier if you surround yourself with great people who celebrate your wins and pick you up with your losses.  More importantly, you need to be that friend to others.  Don’t follow the pack.  Try to follow who you know yourself to be.  Your true friends will be with you.

I started Stuart Hall its inaugural year.  We were the second graduating class in 1992.  We had 19 boys in that graduating class.  2 have died very young in horrific accidents.  Both were close friends.  I’m happy to say that many of the 17 are still some of my closest friends today.

Favorite Tracks: “Waiting Room” “Bad Mouth” “Give Me The Cure”