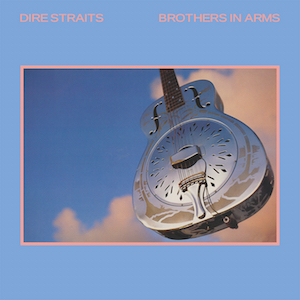 The track that defined Hurricane Ida.  This may be the only album that has had relevant significance in my life for over 3 decades. It’s an album that flashes snapshots in my brain of myself as a child, a teenager, and an “adult” in his thirties. An album I’m always coming back to.

Brothers In Arms (ironically Knopfler had kicked his brother out of the band prior to this release) is Dire Straits 5th album.  By this point, they were a very successful, widely known band...but this record would launch them into a different stratosphere. Led by guitar virtuoso Mark Knopfler who in my opinion is still underrated in this current day (I urge you to check out his current solo work), the album was one of the first printed on CD, contained an iconic cutting edge music video, caused a stir in the gay community...and went 15 times Platinum... just in the USA.  But back to Hurricane Ida.  This storm came upon New Orleans out of nowhere.  And it was massive.  We evacuated to the Northshore on a Saturday afternoon unknowing of the destruction that was to come in the very near future.  Also, we admittedly were not taking the hurricane very seriously given how little press coverage it had, the lack of an emergency declaration or mandatory evacuation being called.  Many of the last hurricanes had ultimately cried wolf.  I woke up that Saturday and could not get the song “Money for Nothing” out of my head...mainly the incredible drum and insane guitar intro.  I thought you may like it and you did.  We probably listened to it 50 times.  Your mom was going nuts!  I found every version we could on YouTube (highly recommend this Live Aid version) and even went into the small hall bathroom to really let the sound echo.  You cut some epic air guitar on that invisible Les Paul as well.  There’s not much I can add to that song that isn’t universally known: the guitar tone was created by accident via the microphone placement in the studio, Knopfler wrote it in a hardware store while shopping and the lyrics are almost verbatim from an employee of the store, the song contains homophobic slurs that Knopfler insisted be kept in the song as he used to work in journalism and needed to keep that integrity, and its music video was revolutionary for its computer animation.  Fun trivia fact: it was the same video producer who created perhaps the best music video of all time and one of my favorite 80’s songs, A-Ha’s “Take On Me”.  And, of course, Sting sings on the track and Knopfler gave him a writing credit because the 5 words he sings are pretty much a sample of Sting’s “Don’t Stand So Close to Me.” I was around 5 years old when this song came out and I loved it immediately.  You are 5 years old and air shredding to it as well.  We’re still repairing the damage from the hurricane.

The second hit off this album is “Walk of Life” or as we liked to call it in high school, “Dietz at the Beach.”  This song was included (apparently Knopfler wanted it excluded on the album) on so many of our high school cassette mixes.  I can smell the Boones Farm and Red Dog cheap beer when synth opens the track.  Our senior year spring break trip was a wild one in Ft. Walton Beach, FL.  We still tell stories about it but, perhaps, the best thing we got out of it, in the long run, was a picture of Dietz, in his tighty whities, cigarette in mouth (don’t smoke. This was a different time) running from the beach into the Gulf of Mexico.  Art came to life.  Dietz at the Beach.  The album opens with the beautiful “So Far Away” on which Knopfler laments the woes of being in a traveling band and on the road all the time.  This was a song I played often on my incessant business trips in the mid-2010s that took me all over the country and Europe as well.  I identified so clearly with it; the fatigue and exhaustion from nonstop air travel and longing for more stability in my home and personal life.

The most overlooked track is probably “Why Worry.”  This could be the mantra for the practice of Stoicism.  Like this album, I’ve also come back to the work of the Stoics Epictetus and Seneca’s over the course of my life.  Worry about the things you can control and let the rest slide off. Yeah, do the walk of life.

Favorite Tracks: “So Far Away” “Money For Nothing” “Walk of Life” “Why Worry” “Brothers In Arms"