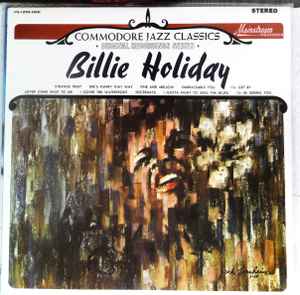 Billie Holiday’s music is the easiest way to travel through time.  Born Elinore Fagan (allegedly), she changed her name to Billie in honor of the silent film star Billie Dove.  Holiday possesses a voice with feverish emotional character.  Her syncopations work like brush strokes on canvas.  Her voice has the ability to not only paint granular pictures, but she has the power to take you along as her escort through every song.  Also one hell of a good listen late night when legless and feeling nostalgic.  This was another one of my first Jazz album purchases.  It’s in regular rotation.

Mostly active in the 1940’s, Holiday had a life marked by racism, poverty and addiction.  If your resume read like the following, where do you think you would be? Truant, mandated to a facility for troubled girls, drop out, Brothel worker, and prostitute…all before age 18.  If you guessed “one of the greatest women in music history,” well then, good guess.  This compilation features some of her best work.  The first track, “Strange Fruit,” is haunting and one of her finest.  Adapted from a poem depicting lynched slaves hanging from poplar trees, the hair-raising way which Holiday uses space and hangs phrasings is stirring.  The song was named Song of the Century by Time Magazine in 1999.  “She’s Funny That Way” and “Fine and Mellow” are hopeful songs but ugly glimpses of our patriarchal past.  “Love is like a faucet.  It turns off and on.”  Side B is comprised of beautiful songs of longing which culminate in my favorite Holiday track, “I’ll Be Seeing You.”  She masterfully stretches time in her vocals on this track, a brilliant metaphorical device.  Stretching and reaching for a time that has passed her.  A feeling impossible not to share.  Being in love with another human is a strange phenomenon.  It’s all encompassing and overtaking.  It’s like a foreign object enters our body and our immune system and body struggle to extract it.  Sounds pretty awful huh?

Stoicism and self help books are ubiquitous currently.  They all seem to carry the same message, “live in the now!”  What complete bullshit.   Now can be a very unattractive, dangerous place.  Billie is a great example of this.  Nostalgic depression or “living in the past” is deemed stunting and fear of the future, anxiety, the same.  I think we need a healthy dose of all three Ghosts.  How can we appreciate who we are or what we have without contrast? Billie may not be your escort to these realms, but don’t be afraid of whomever that spector may be in your life.

Below is the closest Spotify Album match: