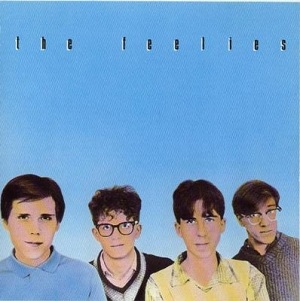 This morning on the way to drop you off at school, we were listening to the new Panda Bear album Reset.  I made a comment along the lines of “oooohhh I like these melodies.  Very Beach Boys and Feelies.”  You didn’t really care about the Beach Boys or The Feelies, but you did ask, “What’s melody?”  I’m no music professor so the quick lesson was “melody is what makes you move your head from side to side (and what gets stuck in your head), typically guitar and even vocals. And then there is rhythm…rhythm is the backbone, typically the bass and drums that gets your toes tapping.”  I knew you understood when you replied, “OK, can we go to the doughnut store?”

About a year before you were born, I got super into R.E.M, especially their debut album Murmur.  Murmur is not only a near perfect album but it’s an appealing intro into jangle pop.  Jangle can be defined by the undistorted, treble boosted, sinewy (typically a 12 string) guitar chord progressions.  Again, I’m no music professor but you will know what I mean when you hear it.  I wanted to know how Murmur arrived at its sound which led me in a roundabout way to The Feelies.  I snapped up their second album The Good Earth first (it was cheap and available) and dug it instantly.  Eventually, I was able to track down an affordable original copy of their debut album, Crazy Rhythms.  I’m writing about this album first because of the album’s titular association with our convo this morning. Much like yourself, Crazy Rhythms is a non stop, high energy party.  You can feel every song. There’s the minimalist pulse of Velvet Underground, Modern Lovers, and even Big Star (“Everybody’s Got Something to HIde”) mixed with the bones and flesh of The Stooges, Television, and cosmic country era Byrds.  But it’s the dueling jangly guitars layered with the tribal “crazy” percussion that really differentiates them from those that preceded them.  And what would go on to inspire R.E.M., the Athens and NC college rock sound as well as the Dunedin sound in New Zealand (Check out The Bats).

A fun or very frustrating way to look at an album can be to look at it as a problem.  Invert, always invert!  When we are young…and old, we are quick to judge things and we think we know all the answers.  When I was a kid, I remember thinking, “Good Lord the Beatles suck.  Why do you like this mom?”  However, that was a completely off the cuff, impulsive response.  I hadn’t thought about how radical this band was given what music had preceded it, what was occurring in the modern Beatle era, and what impact the band had on the future.  The evolution of music is so amazing and so adaptable to everything you may face in your life.  Always be open to different perspectives, think forwards and backwards before arriving at a conclusion.  In my closet, you will see a book called Charlie Munger’s Almanack.  Read it.  One especially memorable quote of his is, “All I want to know is where I’m going to die, so I won’t go there.”  PS: The Feelies cover the Beatles on this album.  I’ll let you figure out where.

Fun Trivia: Many think Weezer's debut was inspired by The Feelies and this album cover, given the 4 members in the foreground, the infamous blue background and the nerdy look of the band.  Rivers Cuomo stated that he had never heard of The Feelies at that time.  Sadly, that seems to be a common theme.

Favorite Tracks: “The Boy With The Perpetual Nervousness” “Loveless Love” “Original Love” “Everybody’s Got Something to Hide”